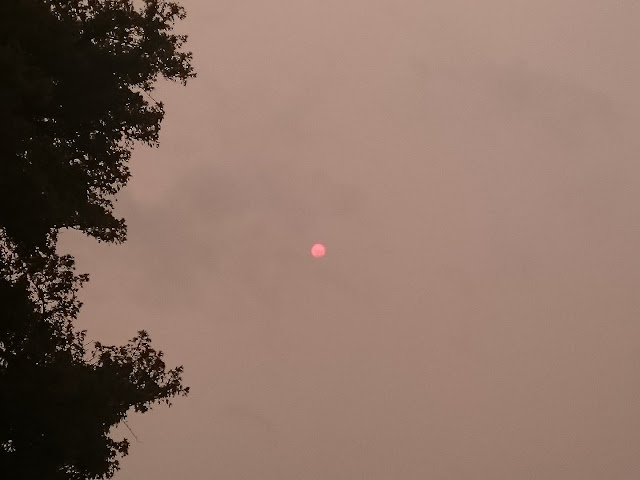 I'm currently staying at my father's house in the countryside, so I can recuperate from some recent surgery.  Meanwhile, Storm Ophelia is about to crash into Ireland, and has stirred up the atmosphere so much that this is what the sun looks like at 11:30am.

It is amazing, and beautiful, and eerie.

Stuff like this is the kind of thing that is so important for an imagination.  The fantastical worlds that we imagine and commit to paper as writers and artists are nothing without a touch of realism to back them up.  Smells, tastes, feelings- these are the things that make even the impossible feel real, and seeing something like this today is an experience nobody should miss.  Take a good look, keep the memory, and file it away for a time when we're describing other worlds.

My own upcoming novel has skies that may look like this occasionally.  An ever-clouded sky is one where the sun is rarely seen except like this, as a strange shape hidden behind atmospheric distortion.  I originally based those skies on my experiences of autumn on the Welsh boarders (where I grew up), where occasionally we'd see the moon poking through the cloud cover after dark, but today has given me a strange new insight into what my unreal world must look like to the people who live there.