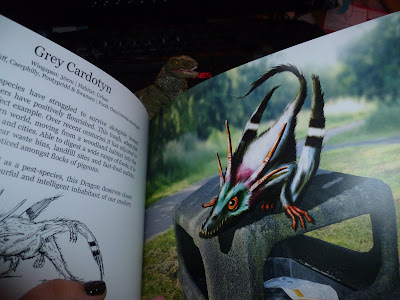 Today I received a very exciting package in the post- a signed copy of Andy Frazer's 'Dragons of Wales'.  Those of you who know me personally will know that if there are two things I go absolutely crazy for, it's signed things and dragons.  But mainly, dragons.  Because dragons.

Did I mention the dragons?

Now, I admit that I don't know Andy Frazer at all- I purchased this signed copy from the website shop (which I will link to at the bottom of this post), rather than going on some kind of crazed stalking campaign to get a signed copy in person.  I also follow the official 'Dragons of Wales' twitter, but apart from that I really know nothing about the creator of this amazing book.  One thing I can say, though, is that they have an incredible eye for the natural world, and a truly epic imagination.

I grew up on the Welsh borders.  As I flick through this book, I see the places I used to roam around as a kid, infused with the kind of imagination I had back then(and hopefully still have now.)  I look at these pictures of little, pteranodon-like dragons, and feel like I might have actually seen them when I was exploring the fields and woodlands around my childhood home.  To bring these amazing cryptids to life so flawlessly is a rare skill, and it makes this book a real gem to read.  In truth, I feel like we need more books like this in the world- ones that blend the real world with the fantastical so seamlessly that I feel as if I could grab some binoculars and a packed lunch, and go and find these little beasts for real.  And it's not just the illustrations that are wonderfully detailed- the descriptions are too.  It reads a bit like a junior bird-spotter's book, with wing-spans, habitats, and playful descriptions of each dragon's temperament and habitat.  Basically, it has everything you need to convince your younger relatives that dragons are real- and what could possibly be better than that?

I suppose it may seem strange to find a review of a book like this coming from somebody who primarily deals in horror and the darker elements of fantasy and science-fiction, but here's the thing: if we cannot appreciate the beautiful and the pure, then horror loses its punch.  I adore books like this one because they help me to keep my innocence, and without that, I feel that there would be no authenticity in my writing.  I suppose it also helps that I've been collecting dragons since I was 9, but in this case that's just a happy coincidence- I'd love this book just as much if it was about pixies or unicorns, because it is the quality of the work and the care that has gone into it that makes it what it is.

I can't really say much more about 'Dragons of Wales', other than that I really hope there are more of them in the future.  This edition (as the name suggests) covers only the species found in South Wales, so there's definitely room for more, and I will definitely be there to read about them when it happens.

In the meantime, I suppose I just have to hope that my Dad's house is close enough to Hay-on-Wye that I might get to spot a Coed Creeper rooting for beetles in the garden next time I go for a visit!

You can pick up your own copy of the book from the official website: Dragons of Wales
at August 15, 2017